GET 10% OFF YOUR FIRST ORDER! USE CODE: GETMY10FREE STANDARD SHIPPING ON ORDERS OVER $99 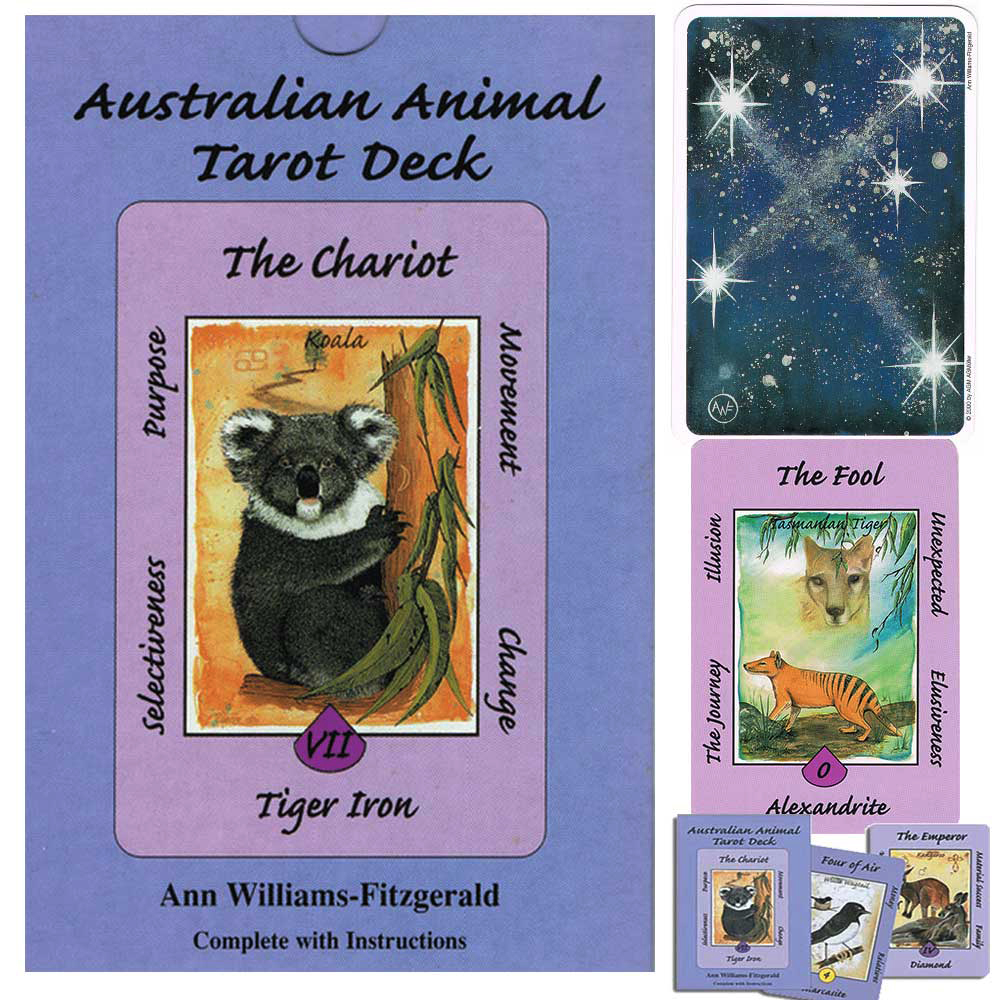 An entirely Australian Tarot deck, each card of the Australian Animal Tarot features each card a different reptile, bird, animal or insect depicted in exquisite in detail. Four keywords and a gemstone are also included with each card. The suit elements are also modified in the past – Wands are Earth Swords are Fire and Pentacles are air.
The Australian Animal Tarot is a deck of 78 cards by Ann Williams-Fitzgerald. It was first released through US Games Systems in 2001.

It is an unusual deck because it’s far more Oracle than Tarot yet it’s constructed as a regular Tarot deck. There are Major Arcana names are still present, however the standard figures have been eliminated to be replaced by the diverse creatures native to Australia which have been chosen to represent archetypes of the Major Arcana.

The Fool is symbolized as an animal called the Tasmanian Tiger, The Magician is now the Australian Raven, and the High Priestess is now the cat. It is believed that the Minor Arcana is broken up into suit comprising Earth, Air, Fire and Water and the court titles remaining the same. However, the associations between suits differ. In this deck this suit Earth is associated with the suit Wands, Fire is related to the Swords and Air is associated with the Pentacles and Coins. The suit of Water retains its connection with the Cups. The crystal associations of the cards appear to be the choice of the writer. Some are obvious while others can be a little more difficult to understand what the reason was for choosing this particular stone. For instance The Nine of Water represented by the Humpback Whale is connected to Aquamarine as is The Ace of Fire represented by the Tasmanian Devil is associated with Red Tiger Eye, while the Ace of Air represented by the butterfly is linked to Malachite which is a stone that is more closely linked to Earth instead of Air. Each suit is still populated with the fourteen cards commonly used in the pips Ace through Ten as well as the court cards of King Queen, Knight, and Page and each one is depicted with a distinct animal or crystal.

The art is easy and captivating that is soothing to the eye and stimulating the imagination. Each card is a light purple background, with the hand-drawn, coloured and hand-painted image of an animal at the centre. The card’s title is on the top, the animal’s name is at the bottom, along with four keywords as well as a crystal connection to each card along the edges. The backs of the cards feature The Southern Cross the constellation that is the most popular on the Australian sky and are not reversible.

The differentiators between the two Tarot system can be complicated at first, however the cards speak for themselves after some practice. It is possible to avoid the Tarot connections initially, and use the deck in an Oracle style instead of Tarot until you are comfortable to the deck. After a while of using the deck, the user will begin to recognize the patterns that are emerging, which connect the deck as well as its animals to traditional Tarot. Beginners or advanced Tarot students will love the deck when approached using an open-minded mind as well as desire to learn from animals. The advice that the cards give is reported to be remarkably accurate right from the initial reading, yet it is delivered with a gentler style of wisdom than many Tarot decks typically display. It is sincere and clear. People who practice Shamanism and Druidry will enjoy this deck as will all animal lovers all over the world.

Annie Fitz (Auz Vizions) acknowledges the traditional custodians of Country throughout Australia. We pay our respects to their Elders, culture and lore and we recognise their continuing connection to land, waters and communities.